Galicia is a province in northwestern Spain with a 1200 km wild coastline and green lush interior. This autonomus region has its own language that is spoken of 80% of the inhabitants. It also has a distinctive culture and cuisine.

Galicia’s spiritual and cultural centre is Santiago de Compostela, the medieval city that is the end for walkers on the El Camino de Santiago (pilgrimage). But Galicia is more than its Capital. Vigo, Pontevedra, A Coruna and many small villages as Fisterra is worth a visit. Fisterra is a small fishing village where Faro de Fisterra (lighthouse) is Spains westernmost point.

Camino de Santiago de Compostela is a pilgrimage that some people want to do once in their lifetime. There are several routes from many places in Western Europe but the most common is the (Camino frances), that starts in Saint Jean Pied de Port, France in the Pyrenees 790km away. This route will take about a month but many do sections at a time. As we travelled by car from the Pyrenees to Galicia and back we met, saw, talked to many. Most people were walking but there are also people that go by bike. As we drove from Galicia to the Basque Country i was suprised how much of the trek that was on pure tarmac. I thought the trek had tracks with various layers such as gravel, dirt, lush green lawns or fields but it diddent. Just imagine how sore your feet or body would be after (790km) walking on tarmac. Anyhow, thats for another time. 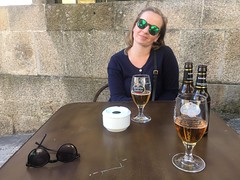 Having a sit down! 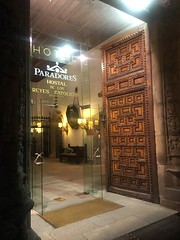 At one of the 5 star hotels in Santiago! 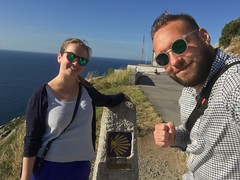 At Faro de Fisterra, looking at the Atlantic Ocean! 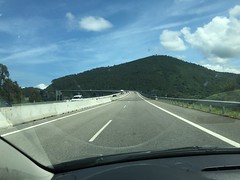 In Asturia, driving towards Galicia. Here the roads are built as akviducts crossing over deep valleys and lush forrest hilltops. 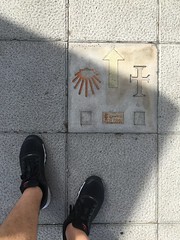 In Santander, looking at camino symbols! 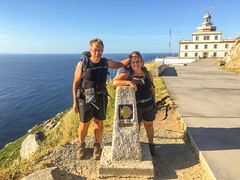 Met these two frenchie's that had walked the entire Camino from France to here, Faro de Fisterra, the end of the Camino!