Afternoon tea is a light meal typically eaten between 4 pm and 6 pm. Observance of the custom originated amongst the wealthy classes in England in the 1840s. Anna Maria Russel, Duchess of Bedford, is widely credited as transforming afternoon tea in England into a late-afternoon meal whilst visiting Belvoir Castle, though Charles 2 of Englans`s wife Chaterine of Braganza is often credited with introducing tea to the court upon her arrival in 1662. By the end of the nineteenth century, afternoon tea developed to its current form and was observed by both the upper and middle classes: “the table was laid… there were the best things with a fat pink rose on the side of each cup; hearts of lettuce, thin bread and butter, and the crisp little cakes that had been baked in readiness that morning.”

Traditionally, loose tea is brewed in a teapot and served with milk and sugar. The sugar and caffeine of the concoction provided fortification against afternoon doldrums for the working poor of 19th and early 20th century England, who had a significantly lower calorie count and more physically demanding occupation than most Westerners today. For labourers, the tea was sometimes accompanied by a small sandwich or baked snack (such as scones) that had been packed for them in the morning. For the more privileged, afternoon tea was accompanied by luxury ingredient sandwiches (customarily cucumber, egg and cress, fish paste, ham, and smoked salmon), scones (with clotted cream and jam, see cream tea) and usually cakes and pastries (such as Battenberg cake, fruit cake or Victoria sponge). In hotels and tea shops, food is often served on a tiered stand; there may be no sandwiches, but bread or scones with butter or margarine and optional jam or other spread, or toast, muffins or crumpets. It was the emergence of afternoon tea that saw Britain regard biscuits as something dunked in tea; a British custom that was later exported around the globe.

Afternoon tea is also served at luxury hotels around the world, we wanted to try Afternoon tea at the Dorchester, one of the best hotels in London. We had a great time feeling posh as the privileged for a few hours. 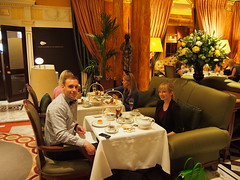 Afternoon Tea at the Dorchester! 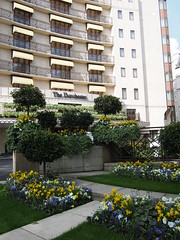 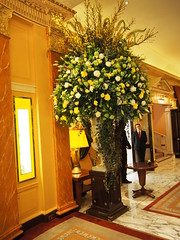 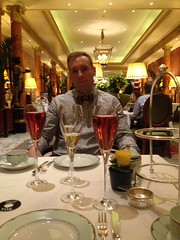 Bring on the Champagne. 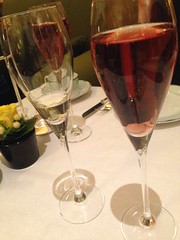 Afternoon tea with a few glasses of bubbles. 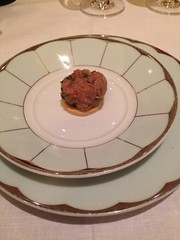 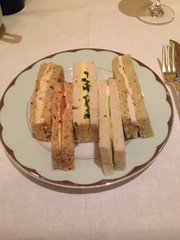 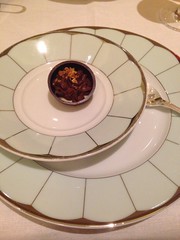 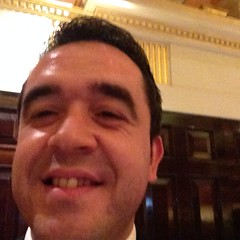 The waiter having fun with the camera. 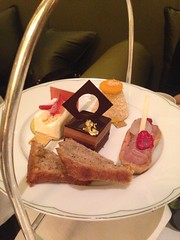 Finally, the most important snack. 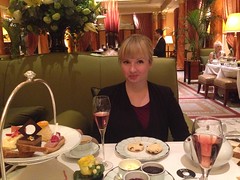 Ready for some sweets?
MENU